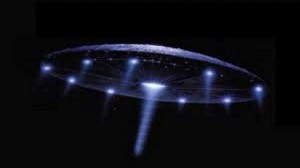 My husband and I had gotten back from work late at night and were up in our kitchen. We opened the window to enjoy the clear crisp night and we just admiring the view plus our building was higher then the others to the South. We were chatting near the window, and then I saw a V formation coming towards us, and at first I thought it was a flock of geese, and my husband and I saw at the same time that they were disks. They were moving very swiftly, made no sound and had no lights. The only way that we were seeing them was that the bottoms were lit up by the city lights. The disks were black looking against the dark sky, but had a rusty orange color, mixed with diffused light. There were three on one side and two on the other (counting the leader of the V). We yelled excitedly and ran for the door to run up to the roof, calling to my father to follow us. The roof was three more flights up. When we got out, it was harder to see them but they had picked up an extra one and were heading back down until we could no longer see them. Up on the roof, there was more light shining up from the street lights, and the colors of the UFOs blended into the dark sky. I went up on the roof days after that to see whether we could see them again, and we didn’t see those again. I think I may have tried to report it to the newspaper and they did not want to take the story. Everything happened so fast and it was before digital cameras, cell phones, etc., where we could have recorded it.  We both felt happy that we had seen them together. We were thrilled. NOTE: The above image is a rendering.

Thanks to MUFON CMS system.