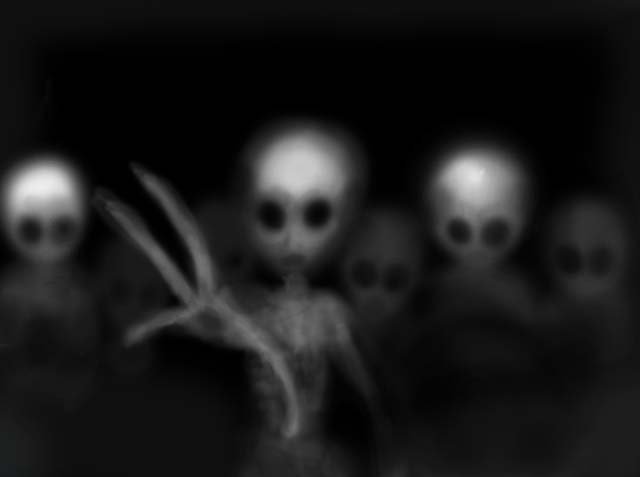 “I was not a big UFO person, didn’t know much about it other than my own experience.” Sitting in her Tyler, Texas home, Charlotte man tells us about her experience, which she calls the “family secret,” many of the details discovered on her grandparents deathbeds.

It was April, 1941 in Cape Girardeau, Missouri. Around 9:30 p.m., Charlotte’s grandfather, Reverend William Huffman, got a call about a plane crash and was asked to help. “When they got out there, it wasn’t a plane crash at all. It was a saucer, was how he described it,” says Charlotte.

According to the story, 3 alien bodies lay on the ground next to the spaceship; two already dead. “However, granddad said the third one when he got to him, he was breathing very shallow and so he did pray with him. He did expire as he was on his knees praying for him. He then went to the other two and prayed over them.”

Charlotte’s grandfather then took a closer look at the spaceship. “What he was most impressed with was in the inside there were writings, but he did not recognize it. He said it looked similar to hieroglyphics. The Egyptian hieroglyphics,” explains Charlotte.

Quickly, the scene was covered with military personnel and Reverend Huffman was sworn to secrecy. Charlotte says, “He was told, ‘This did not happen. You did not see this. This is enormous national security. You’re not to ever speak of it again.'”

But the enormity of what he had witnessed was too much for a man. The shock on his face told what his words, at first, did not. Then after gaining their promise, he shared with his family what had happened. “Granddad was a quiet man to begin with but grandmother said the look on his face was different,” says Charlotte.

A few weeks after the UFO crash, Reverend Huffman was given a picture taken that night by a local photographer. “He felt like someone else besides himself should have a copy and granddad was the only one he trusted. So he gave him a copy of the picture. So I had seen that picture all growing up.” Charlotte goes on to say, “You couldn’t see those big eyes and not be affected. It wasn’t anything I had ever seen.”

That picture went missing years ago after her grandfather loaned it to a friend, who never returned it. But seeing that picture and knowing the integrity of her grandfather, Charlotte believes the story is true. But, she never had any proof until a few years ago while doing research for a documentary on the crash.

“We got validation by going to the archives in Washington D.C. And to see a top secret declassified document that stated that there was in fact a crash retrieval in 1941 in Cape Girardeau, Missouri, for me, I have not forgotten holding that paper in my hand and realizing that my family’s story was real, was solid, and for me was just an answer to a long time question.”

But Charlotte knows some people will still be skeptical. “That’s OK with me. I don’t have to convince anybody. I just have to know what’s true for me. I think it’s arrogant to think that a God that we have that is so awesome, created just us. I also don’t think that we have to worry about a huge threat from them because if that were their intention, that would have happened a long time ago.”

Charlotte’s story is one of many involving UFO’s and she’s quick to point out, it won’t be the last, saying the next extraterrestrial visit is not far away. “I don’t think that’s a thing of the future. I just think we’re going to see more of it and Stephenville is just the beginning of it happening everywhere. I think there will always be things that we are not aware of but we should always keep an open mind for possibilities.”

The UFO crash of 1941 in Missouri continues to be researched and investigated today. So far, the story has been included in two books and one documentary. NOTE: The above image is a rendering.

KEN PFEIFER WORLD UFO PHOTOS ……. Thanks to Phantoms and Monsters